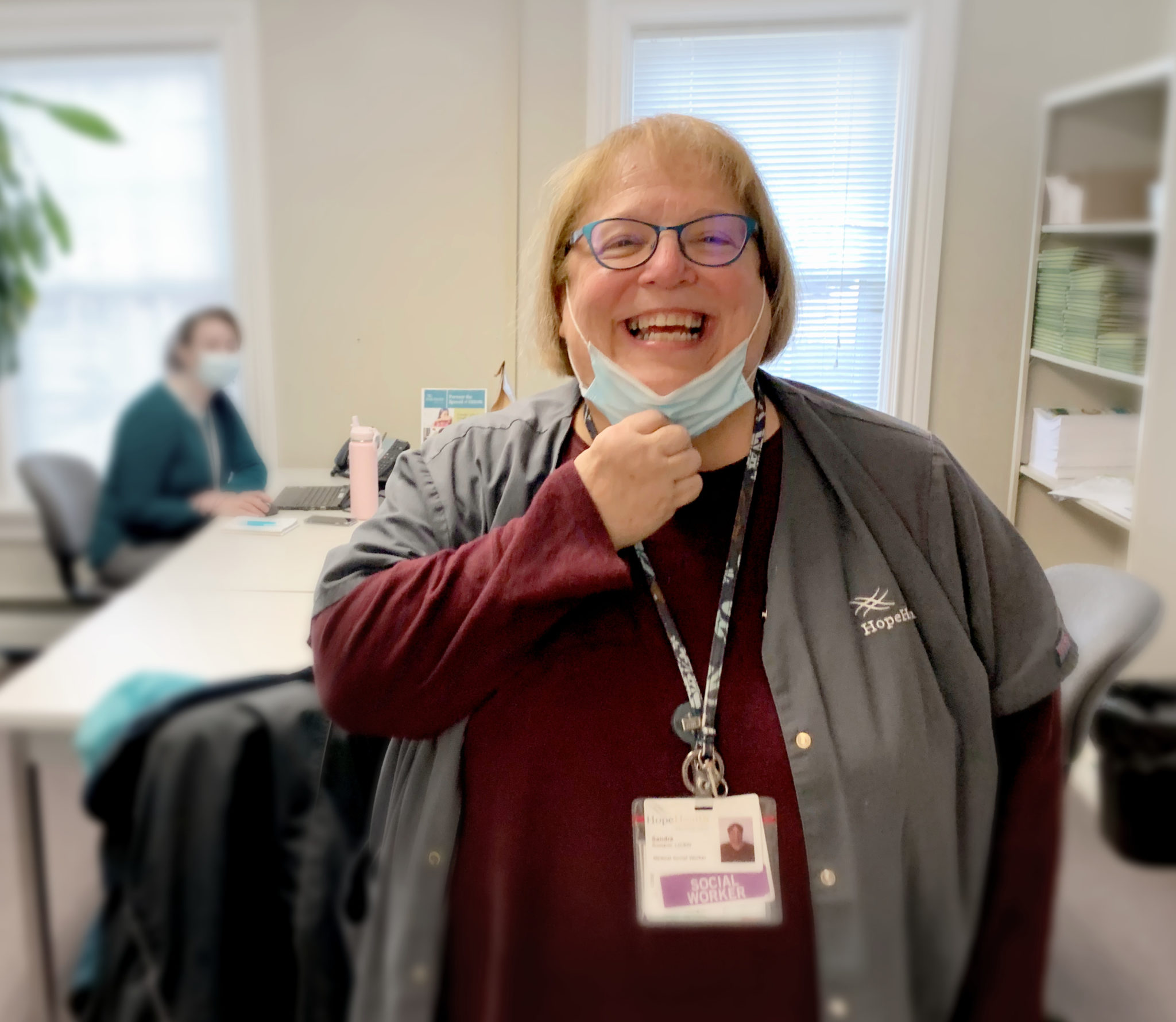 Sandi Romano, LICSW, MSW, hospice social worker, can’t tell you how many times families tell her this when she is about to meet their seriously ill loved one for the first time:

“Don’t mention that you’re from hospice. We think it’s going to upset them.”

But sometimes, says the veteran HopeHealth social worker, the patient knows more than their family thinks they do.

“Then I walk in and sit with the patient and the patient will say to me, ‘I know I’m dying, but my family’s having a hard time with it,'” Sandi says.

Sandi helps patients and families navigate the complicated emotions that often accompany end of life. Her signature laugh is well known around HopeHealth’s Wakefield, Rhode Island office. She’s part of the hospice team that includes nurses, chaplains, doctors, aides and volunteers. Sandi joined HopeHealth in 2000. She has been in social work for 47 years and is planning to retire at the end of 2021.

March is National Social Work Month so it’s an ideal time to draw attention to the contributions social workers make, including those who focus on patients at the end of life and their families. As a social worker, Sandi is trained to empower people to overcome personal or systemic barriers in order to live the best life possible. As a hospice social worker, her job is to help patients and their families to take control of the days they have left together and make the most of them.

She focuses not just on the patient nearing the end of their life, but the patient and family together as one unit of care. Sandi observes the person in their environment to understand the family system that supports them or doesn’t. And when a patient dies, she is there to comfort their survivors and help them manage their grief.

Sandi looks at everything around the patient, including relationships between the patient and other family members. She helps patients get the best possible care, stay in contact with their families, and get what they need at home after being released from the hospital.

Sometimes Sandi navigates complicated family dynamics. When some family members aren’t talking to other family members, she has to keep open communication with everyone.

“When it’s prickly, you tread lightly,” she says.

“So many things impact the patient,” Sandi says. “If their family is upset, they’re upset. If things are going okay, they’re much more peaceful.”

The social worker also initiates the conversation about what a patient’s funeral wishes are, ensures they are communicated to the family, makes sure advance directives are in place. The sooner the conversation happens, the better for all involved.

Some folks are reluctant to use the term hospice because they feel it’s a loaded word that connotes despair and hopelessness. It doesn’t have to be this way, Sandi says.

So what does she do when a patient really doesn’t really want to discuss the fact that they are dying?

“I’ll say to people, well what do you think about being on hospice?” she says. “If I can say the word.”

Then she probes with open-ended questions: What do you think about having this choice at this time? What does this mean to you?

“Then they can talk about what they want. Some will delve into that and some won’t. Some won’t want to talk about it and that’s OK. It’s not mandatory that people talk about everything. I think we’re a very verbal society and we think verbal is really good. And it is, it’s helpful, but not everybody does it that way.”

Sandi listens when a patient talks about being afraid and asks what they are afraid of — things like pain, things like being alone. Things a hospice worker can help address.

Sandi will get patients to talk about their lives. She’ll ask how they met their spouse and what that was like.

A little pearl such as expressing fear about having cancer. Sandi listens when a patient talks about being afraid and asks what they are afraid of — things like pain, things like being alone. Things a hospice worker can help address.

Sometimes, though, a patient outright refuses to engage in a conversation.

“I’ve been a clinical social worker now for 47 years so keep that in mind. And in those 47 years, I can count on one hand the people who have said, ‘Don’t come back.’”

After retirement, Sandi looks forward to spending more time with her five grandkids. The youngest is five.

“That has always been the thing that balances me, that I can have time with my grandchildren,” she says. “They are filled with life just because they breathe. You get that by osmosis. You absorb their life energy into you.”

She has hope for her next chapter, a life after a long career of helping others. She knows there are good days left.

Each one will be its own little pearl.

Over the course of her long career, Sandra Romano, MSW, LICSW, has witnessed a broad range of emotional responses and reactions from end-of-life patients and those who love them.

Sandra Romano plans to retire at the end of the year after a 47-year career in social work, including 21 providing hospice at home with HopeHealth’s team based in Wakefield.